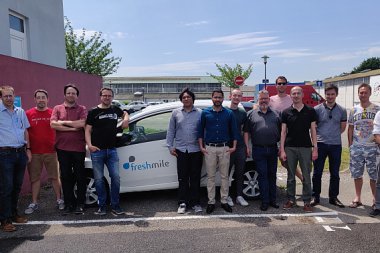 Between 4 and 6 June the first OCPI developer meeting was held at the office of Freshmile in Strassbourg. 15 people from different countries participated and several OCPI board members joined in. Participants came from Allego, Freshmile, Share&Charge, EVBox, NKL, GIREVE, e-clearing.net, Fastned and NewMotion. Besides the intensive sessions during the day, the group also had a chance at getting to know each other more closely.

With great enthusiasm improvements and new functions were discussed under the direction of Robert de Leeuw from Ihomer as technical editor. Summarized the following results are achieved:

Fix on documentation of command module for v2.1.1, including 36 text improvements.
For v2.2 we will include a solution for Eichrecht (Calibration law) support, support of Authorisation without white list, linking authorization directly to a session and CDR for verification purposes, add country code and party ID to all objects, improvements in price details in CDRs. This version will also support the National Access Points.
We agreed to support in V3.0 plug and charge according to ISO 15118, while following the discussions and developments in this group. Other improvements are replace Patch by updates to smaller updates, batch updates and GET ALL will be replaced by asynchronous Batch PUSH.

The coming weeks a planning will be set up for the web conferences and face to face meetings for the rest of this year, so we can continue improving OCPI. A next RC for version 2.2 will be available end of June and hopefully when we get enough feedback we can finalize version 2.2 in August. Version 3.0 RC1 is planned for the end of 2019 and we aim for a final version of 3.0 around summer 2020.

Your contribution or that of your organisation is very valuable. We therefore invite you to participate in the development sessions. Join us.